1. How did it feel when Boyfriend From Hell hit the best selling ranks? Was it any different when Earth Angel became a chart topper?


January 2012 was the first month Boyfriend From Hell appeared on any Best Seller lists.  It felt awesome.  Two months earlier I was struggling with sales.  I think I sold 67 books in November.  So to go from that to a Best Seller made me feel like all my marketing efforts were paying off.  Pixel of Ink wanted to feature both books in a side-by-side feature in March.   That feature really helped. Both books became #1 and #2 Best Sellers in Children’s Spine-Chilling Horror, and #7 and #8 in children’s ebooks.  I was hoping to get both books into the Kindle top 100 in any category in March, but to be in the top 10 in a number of categories felt awesome.  It was amazing.  I still can’t get over it.

2. One reviewer called ‘Never Slow Dance with a Zombie’ a “a fun zombie teen romance”. Was it challenging trying to balance social pressures of high school with the imminent danger of zombie students?


I’m sure it was, but I don’t remember.  I wrote Never Slow Dance With A Zombie in 2006.  All I remember about the process was making sure I stuck to my page count, and how much fun I had.  One of the things about getting older for me is I only remember the fun stuff  ;-)


3. Your forthcoming Hollyweird series sounds exciting. Can you share any tidbits or teasers?


I wanted to do a series that was kind of noir-ish, like a Raymond Chandler mystery.  I call the genre teen-noir.  Fifteen and a half year-old Kris Golden is a necromancer who lives in Hollywood.  She has a sworn duty to lay the risen dead back to rest, and in each book she does just that while also solving a murder mystery.  There’s even a neat love story.  I am very excited about the first book: The Zombie Always Knocks Twice.  It will be published by Imajin (An awesome Canadian publisher), and is due out end of summer.


4. You write adult horror under an alter ego Sal Conte (which I’ll probably never read because I’m a scaredy-cat). How do you manage two distinct fan bases? Do you use multiple email and social networking accounts?


Interestingly, I haven’t been able to get my alter ego, Sal Conte off the ground.  Last year I got the rights back to the two original Sal Conte horror novels published by Dorchester that I wrote in the 80s when I was in college.  Both of the original Sal Conte books did very well back then. I brought Child’s Play out as an ebook around Halloween along with the new short story, The Toothache Man.  I still haven’t brought out The Power.  I can’t seem to find the time to market Sal properly.  He has his own Twitter account @SalConte1 and occasionally sends out a few tweets, but it isn’t enough to affect sales.  He sells very few books. I decided to let the Sal Conte titles languish until E. Van Lowe has a strong, reliable fanbase, and I bring out his new novel.  I could probably do another short before then, but I don’t believe that’s the best way to build fans.  You probably won’t hear much from Sal before Halloween 2013, but thanks for asking.  If anyone is interested my adult horror, Sal Conte has a page on my website and his work is available on Kindle and Nook.


5. You’ve had a diverse and successful career - what’s been your proudest moment?


My proudest moment is when my son graduated college.  I am from the South Bronx.  When I grew up it was one of the most depressed ghettos in America.  I am grateful to have had the life I’ve had, and to be able to give my children the tools they need to thrive in the world today.  It’s great living in Hollywood and being nominated for Emmys and an Academy Award, but nothing beats the swell of my chest when my family does well.


6. Can you talk a little bit about your work with ‘Educating Young Minds and Operation Education’?


Giving back is something I’ve always tried to do.  Aside from supporting several charities I sit on the board of Education Young Minds. I am also a board member of Operation Education, but they have not been that active this past year.  EYM is a tutorial program that ensures any kid (black, white, rich, poor) gets a good education and a college scholarship when they graduate high school.  EYM has turned so many lives around.  By schooling students with poor skills alongside brilliant students they are able to make every student feel equally valuable as human beings.  It’s amazing how important the ‘human’ part is to excelling. Kids who hated school come after school and are there til 10- 10:30 at night. I’ve never seen anything quite like it.  And they take kids from kindergarten to high school. I am proud to be a part of EYM.  If youd like to know more about the organization here is their website: http://www.educatingyoungminds.org/


Operation Education is a program that gets Nickelodeon and music celebrities to visit schools in the San Diego area, perform and participate in a program that teaches tolerance.  Kids who are headed toward gangs or bullying are touched when TV stars come to their schools and make them feel important.


These are both great (underfinanced) programs.


7. Who’s been the most influential person in your writing career?


I’d have to say my mother.  She’s the person who suggested I try writing stories when I was a kid.  I came down with pneumonia one summer and had to spend my time indoors.  I was a very active kid. I also had a vivid imagination. My mother found a way to channel my imagination and keep me occupied while I was in the house.  It worked better than any of us could have hoped for because I’m still doing it. LOL.


8. How do you measure a productive day at the keyboard? Word count? Chapters?


I go by pages.  I try to write three to five pages a day.  That’s not very ambitious, I know.  But on that schedule I can write two books a year and still keep up with my TV and film aspirations.  Also, not giving myself an ambitious daily page count allows me to have more successful days (where I exceed my goals) than unsuccessful days.  If a writer has too many unsuccessful days, the fun of writing can start to feel like a chore.  I try to keep it fun.


9. Music or no music when you’re writing?


Sometimes, yes and sometimes no.  It depends on my mood, or the scene I’m writing. But usually, I like quiet.


10. What’s your philosophy on supporting other authors?

People should help people.  Period.  If you can help, you should.  I believe we are here to help each other.  So of course I love supporting authors in any way I can.


11. What advice do you offer to aspiring authors?


Sharpen your skills.  We live in a great era.  When I was coming along only a chosen few would ever be published.  Today there are more publishers as well as the option of self-publishing.  But it’s a trap.  Most people the Big Six haven’t published are not published for a reason—their skills are not sharp enough.  Today people feel they don’t need to sharpen their skills.  If no one will publish them, they will publish themselves.  My advice is, do not fall into that trap.  Take a little more time and sharpen your skills.  You may get to market a little later than your friends, but like my mother used to say “cream always rises to the top.”  Starting later doesn’t mean you’ll wind up behind.  If you sharpen your skills your career will shoot past those who came to market before they were ready.  This is not a put down of self publishing—I’m for it.  But don’t self publish just because you can.  Wait until you are ready.

Thanks for sharing some great insights on writing and life! 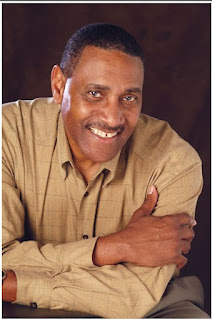 E. Van Lowe is an author, television writer, screen-writer, playwright and producer who has worked on such TV shows as "The Cosby Show," "Even Stevens," and "Homeboys In Outer Space." He has been nominated for both an Emmy and an Academy Award. His first YA Paranormal novel, "Never Slow Dance With A Zombie," was a selection of The Scholastic Book Club, and a nominee for an American Library Association Award.  His Best Selling novels, “Boyfriend From Hell” and “Earth Angel,” are the first two books in the Falling Angels Saga.


He is also, horror novelist, Sal Conte, author of the 80s horror classics “Child’s Play” and “The Power.”  Sal’s latest, “The Toothache Man,” a short story published as an ebook, is available on Amazon.


E lives in Beverly Hills California with his spouse, a werewolf, several zombies and a fairy godmother who grants him wishes from time-to-time.